Plant a tree in memory of Myron
An environmentally-friendly option 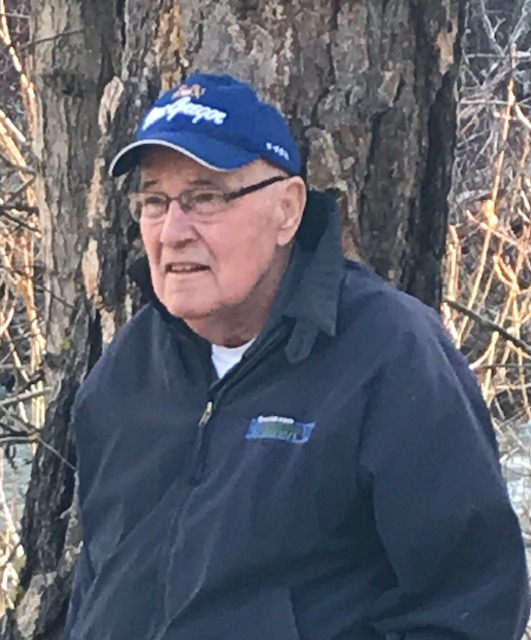 Myron Finkbeiner passed away and entered the gates of Heaven on June 27, 2021, with his family by his side.

Myron was born on February 26, 1933, in Madras, Oregon, the son of Arnold and Ella Finkbeiner.  Growing up in a parsonage, they moved often within the State of Oregon. In 1955 he married the love of his life, Gwen Clark, in Philomath, Oregon.  From this marriage came 5 children:  Jerry, Janis, Julie, Jill, & Jennifer. He recalled living in a lifespan of witnessing a team of horses pulling a combine in Eastern Washington, to men walking on the moon.   He watched a maiden 747 airplane voyage and 50 years later saw that magnificent plane in an air museum. Myron had marvelous memories between this span of time, such as playing on a State Championship basketball team as a Nampa Bulldog; graduating from Northwest Nazarene College; attending the University of Oregon, and in a week’s time walking the stage earning a Master’s degree and learning that he and Gwen were to be parents of a baby boy!   At the same time, a letter was received from the President indicating he would be spending the next 2 years in the US Army. A teaching, coaching career began in 1958 at East Jr. High in Boise, ID, followed by going to Othello, WA, Boise High, Boise, Big Bend Com. College, Moses Lake, WA, and concluding in San Diego, CA at Pt. Loma Nazarene University.  He then returned home to be NNC’s Alumni Director.   His 2nd retirement happened in 1994.  He was still not ready for the couch, so he founded the World Sports Humanitarian Hall of Fame, an organization that recognized and honored good people in Sport.  This lasted 16 years.   To keep busy after this retirement (3rd one) he authored 7 books.  He and Gwen took up traveling with their 5th wheel and spent a few winters in Arizona, but most importantly he wanted to make sure his son and son-in-law were making the right decisions with their own basketball teams.   His highlight most enjoyed was one season sitting on the bench with Jerry and grandson, Ben, while they were coaching at ORU in Tulsa, OK. Thereafter, watching all the grandkids playing sports was a highlight.

Myron was preceded in death by his parents, a sister, Sharon Larsen and brother Arnie.   He is survived by his wife Gwen and 5 children, 10 grandchildren, 15 great grandchildren, sister, Junella Hagood and brothers Paul and David Finkbeiner.

Myron professed to be a Christian and tried to live a life as his testimony.  He believed that passing from this life should be celebrated as much as his arrival some 88 years ago.  Myron gathered Gwen and his children for a family meeting a few months before his passing to give them his final wishes. In lieu of a Memorial Service, he stated he would rather have his friends at home and around the country celebrate his life by gathering in small group settings on their own time over coffee and reminisce.

The family wishes to express their appreciation to Home Health Services, Hospice, and all the doctors who were so considerate of Myron’s needs here in the Nampa area.   Myron will be interned in a family plot in Connell, WA at a later date when the extended Finkbeiner family can get together.

In lieu of flowers, donations are encouraged to the Myron & Gwen Finkbeiner NNU scholarship Fund directed to the women’s volleyball program, 623 So. University Blvd., Nampa, ID 83686.

Plant a tree in memory of Myron by clicking here.
To send flowers to Myron's family, please visit our floral store.

No services to be held

Plant a tree in memory of Myron
An environmentally-friendly option

Plant a tree in memory of Myron

1 tree planted in memory of Myron

Oh Myron I was just thinking of this wonderful man and his wife Gwen.  I met Myron and Gwen when I worked at Thorne Printing.  He was always kind with a smile on his face.  He is so missed.  I wish his family well in this time of closing a well lived life on earth.

My just-for-fun adopted Uncle Myron will forever be loved and missed.  He and his family were so kind to me and my family and I will cherish all of the good times we shared.

Thank  you, Myron, for everything you did for NNU and the World Sports Humanitarian Hall of Fame.

The NNC community has lost a true icon. Always positive, and always creative, Myron exuded enthusiasm for all he did. The NNC Alumni Association and World Sports Humanitarian HOF are examples of his contribution to two of his interests: NNC and sports!!! There will never be another like him and he will be missed!!

Myron was a kind and gentle man who had big dreams and made a lot of those happen. He was generous and a risk taker. He did it all with class. RIP.

Plant a tree in memory of Myron